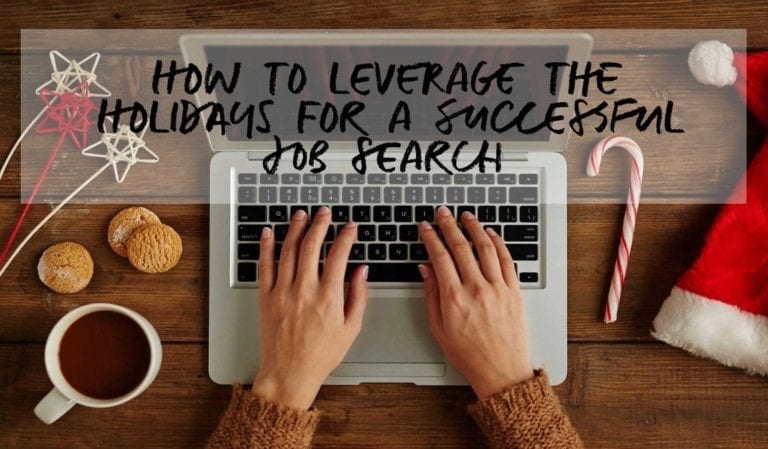 Don’t give up on your job hunt during the holidays! Snag your new job while others are distracted or taking time off during the “slow” holiday period.

Job seekers often suspend their job search for “the holidays,” from early or mid-November through New Year’s Day, on the theory that no one is interviewed or hired during that period. It’s a big mistake! Employers are STILL hiring during this period (to meet the special needs of the holidays, to prepare for the new year, to replace someone who left, etc.).

With so many people dropping out of the job market during the holidays, there is less competition for jobs.  At the same time, many employers are trying very hard to “staff up” to 100% so they can hit the ground running on January 1 at the start of the new year.

Use the Holidays as an Ice Breaker

The common “problem” of “surviving” the year-end holidays can help you establish rapport in an interview.

Even if it’s just complaining about the holiday crowds or being too busy, discussing the holidays is usually a natural topic.

It’s also an easy way to break through the awkwardness of meeting someone for the first time in an interview or networking event, and establishing common ground.

Talk About Your Job Hunt or Employment Status at Holiday Events

If your friends and extended family don’t know that you are looking for a job, let them know, casually, at holiday events.

The connections that lead to jobs can happen in the unlikeliest places – I’ve even seen people make connections at a funeral that resulted in job offers, even new careers. Use these get togethers as an opportunity to let people know that you are job hunting, and ask if anyone knows someone who works at [whatever employer you want]. If you know someone who works at one of your target employers, contact them directly yourself with a greeting card and/or phone call.

The holidays (all year around, but particularly in November and December) are a great excuse to get back in touch with someone – your former boss(es?) and co-workers, college roommates, high school buddies, people in the house/apartment next door, kid’s soccer coach, etc. Think about people whom you genuinely liked but have lost touch with, and track them down using LinkedIn, Facebook, Google, etc.

Hopefully, you’ll be able to re-establish a relationship that can benefit everyone involved. (Might not be a good idea to track down your high school sweetheart, though…unless you’re single.)

If you really know the person well, just call them up. If you don’t know them well, send a greeting card – one of the “real” cards, made of paper, put into an envelope with a stamp, and dropped off at the Post Office.

Don’t take the holidays “off.” Stay focused on your job search, and you’ll land that next great job while everyone else is shopping or not paying attention!